Seasonal forecasts of ocean conditions are presently being developed and evaluated for the coastal waters from central California to Vancouver Island in support of NOAA's California Current Integrated Ecosystem Assessment Program (CCIEA) with a focus on sardines and salmon. The work is being conducted by JISAO of the University of Washington in collaboration with NOAA's Northwest Fisheries Science Center. This project aims to provide experimental seasonal forecasts (six to nine months) of upper ocean properties, based on operational simulations by NOAA's Climate Forecast System (CFS) model, and dynamical downscaling with a high-resolution version of the Regional Ocean Model System (ROMS) that includes a state-of-the-art biogeochemical module. Forecasts of specific oceanic properties crucial to the nearshore and coastal marine ecosystem such as upwelling, pH, mixed layer depth, oxygen concentration and plankton distributions are anticipated with updates on a monthly basis. For more information about the forecast system, please read Siedlecki et al. 2016. 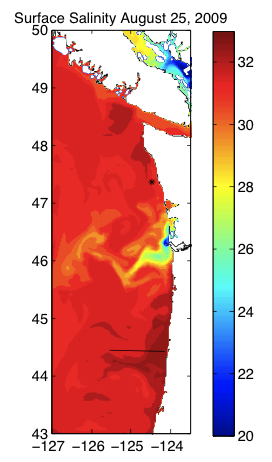 Figure 1: Salinity at the surface on one day in August.

The domain used in our study, seen in Figure 1, extends from 43°N to 50°N including Puget Sound with a horizontal resolution of 1.5 km and 40 vertical levels and was designed as part of the PNWTOX-PNW project

The CFS is used for surface forcing and boundary conditions of the regional model. The CFS is a global, coupled atmosphere-ocean-land model, which uses a 3DVAR technique to assimilate both in-situ and satellite-based ocean and atmospheric data (Saha et al. 2006, 2010). The CFS resolves the global atmosphere at ~200km resolution and the global ocean at ~50km resolution. Monthly and daily averages of CFS output are available online, and include both hindcasts, from 1979-present and forecasts out to nine months beyond present time. The CFS is currently being run operationally by NOAA/NCEP/CPC for seasonal weather prediction. CFS forecasts have significant skill at capturing much of the interannual variability in this property, which reflects both local and remote forcing. Further skill is provided through use of a regional model that can better account for mesoscale processes.

Figure 2: Six-month CFS forecasts of subsurface, near-coastal temperatures in July of each year (forecast from the previous January) compared with the the actual (hindcast) conditions realized on that date.

Our implementation of ROMS includes 17 rivers forced with daily river discharge and temperature data from the USGS gauging stations and an Environment Canada gauging station for the Fraser River as described by Giddings et al. Tides are included. Water entering the domain at the southern and western boundaries is supplied by CFS. Empirical relationships were derived relating nutrients and oxygen, to salinity from the observations of Connolly et al (2010) as described by Davis et al and Siedlecki et al. The rivers enter the domain with constant saturated values of oxygen and a seasonal cycle for nutrients from a climatology of USGS gauging stations data described by Davis et al. In the hindcast simulations, the rivers are based on observed streamflows, but in the re-forecast and forecast runs, the rivers are forced using a climatology of local river discharge data over seven years (2000-2007).

An example of how ROMS provides finer coastal information on the physical system is shown in Figure 3. The CFS model provides past and present hydrography (temperature, salinity, velocity) at coarse scales for August 25, 2009 (3a). ROMS, driven by the CFS atmosphere and ocean models, downscales this information to resolve coastal upwelling and offshore jets (3b). A smoothed version of these features is observed in the AVHRR weekly composites of SST (3c).

Regional algorithms relating oxygen and temperature can be applied to the model fields to determine pH and aragonite undersaturation horizons (Alin et al, 2012). Regional simulations have been carried out in hindcast and re-forecast mode for 2009 as well as a forecast for 2013, the results are discussed further below.

We have demonstrate the ability to use short-term (up to nine month) predictions of ocean conditions from J-SCOPE to create a novel forecast of the spatial distribution of Pacific sardine, Sardinops sagax.

Details of the model can be found in:

The model had moderate skill (AUC = 0.67) in predicting 2009 sardine distributions, five to eight months in advance. Preliminary tests indicate that the model also had skill to predict sardine presence in August 2013 (AUC = 0.85) and August 2014 (AUC = 0.96), four to five months in advance. An AUC of 1.0 is ideal, and an AUC of 0.5 is model that performs no better than a coin toss.