To assess confidence in the predictions, the forecast system was used to model the past in both hindcast and re-forecast simulations. Both simulations present ocean conditions in the past, however a hindcast benefits from incorporating global-scale data to make the best simulation possible. Initial results from a hindcast and re-forecast of ocean conditions during 2009 are depicted below. Comparing these two simulations reveals the degree of confidence one can have in the model’s forecasting ability. These simulations are also compared to regional observations from moorings in the Olympic Coast National Marine Sanctuary along the Washington coast to further assess model forecast skill.

Shown below are the modeled and observed bottom temperature, bottom oxygen and surface chlorophyll plotted as time series from one of the mooring’s, sited at Cape Elizabeth, during 2009. Both the model simulations and the observations were smoothed with a moving average filter of 15 days. The hindcast does an excellent job of capturing even the event scale variability in all fields. While the re-forecast shows less skill, as expected, it predicts seasonal timescales well. The re-forecast performs better with temperature and oxygen than with surface chlorophyll; however it captures the seasonal cycle of chlorophyll – surface chlorophyll is low in the winter and increases during the upwelling season. The re-forecast model predicts lower oxygen nine months out into the future than the hindcast does. This is due to the difference in reversals and downwelling wind events in the two simulations. These results collectively provide a reasonable degree of confidence in the forecast system. 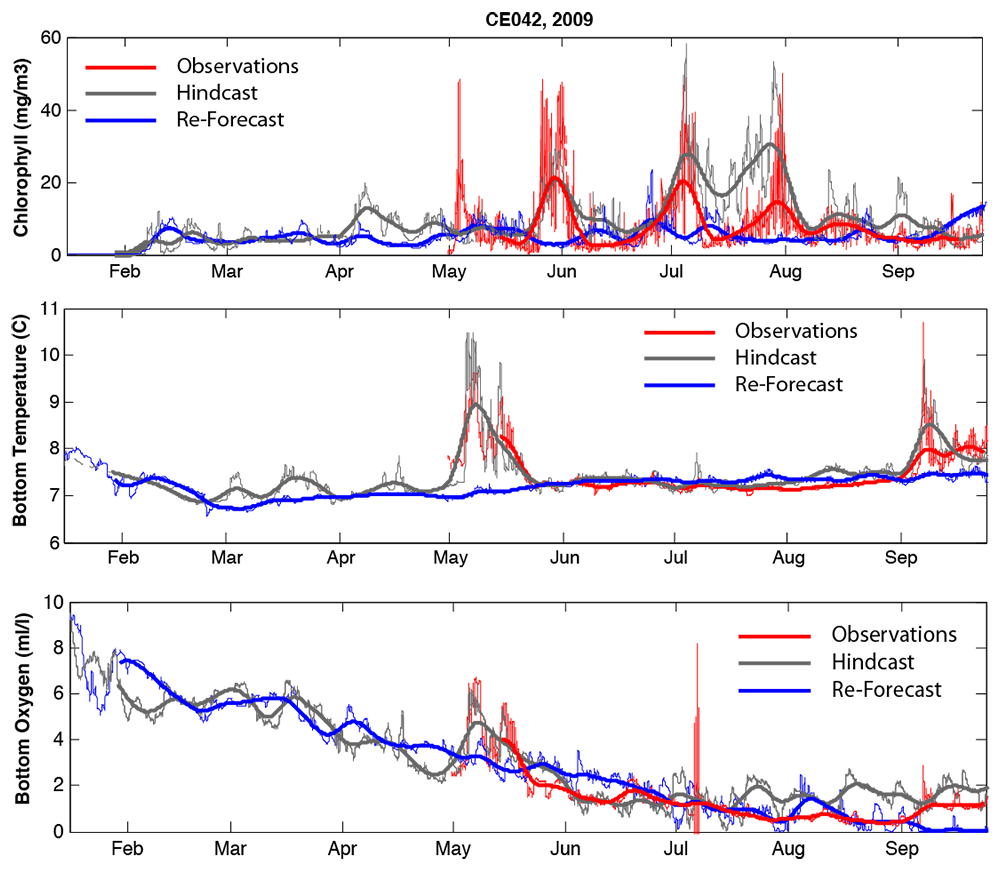 Figure 1: Model comparisons to observations (red) made at the Olympic Coast National Marine Sanctuary in 2009. The model was run in both hindcast (grey) and re-forecast mode (blue). The thicker lines were filtered with a running mean over 15 days while the thinner lines are represent the full model run at hourly resolution. All three panels are from a site off the coast of Washington at Cape Elizabeth (47 deg N) in 42 m of water (a) Chlorophyll at the surface (b) Temperature, one meter off the bottom (c) Oxygen, one meter off the bottom.