J-SCOPE forecast results for the simulation beginning in April of 2015 are shown through a series of figures below. The first figure depicts a series of maps of bottom oxygen concentrations (ml/l) as two-month averages for the region, averaged over all three model runs of the ensemble. The lower panels depict the relative uncertainty from the ensemble for the same time period. From the maps, the onset of hypoxia occurs widespread across the region in July - August. The relative uncertainty ranges from 10% or less in May and June. The relative uncertainty gets higher on the shelf later in the summer (up to ~50% in July - October). A time series from the bottom on the coast near one of the OCNMS moorings sited at Cape Elizabeth is shown from each member of the ensemble. The model forecasts that hypoxia will most likely develop at this location in late June, early July of 2015, but an event occurred in one ensemble member in late May. Finally, the climatological cross-section from the Newport Line from Pierce et al, 2012 is compared to the forecasted average of the ensemble members. The forecast projects that the oxygen concentration in the source waters for the upwelling season of 2015 will be lower than the climatology.

On the Washington shelf, hypoxia is predicted to emerge along the Cape Elizabeth line of the OCNMS moorings in July. The emergence of anoxia (0 umol/kg) in the model is caused by a bias associated with the lack of relaxations in the winds (found to be important in a paper by Adams et al, 2013) in CFS. The model does have skill in predicting the emergence of hypoxia, despite this bias to predict lower than observed oxygen. Given the difficulty in predicting the fall transition in 2013 (see 2013, Year in Review), the 2015 forecast for low oxygen levels persisting into September is likely incorrect. 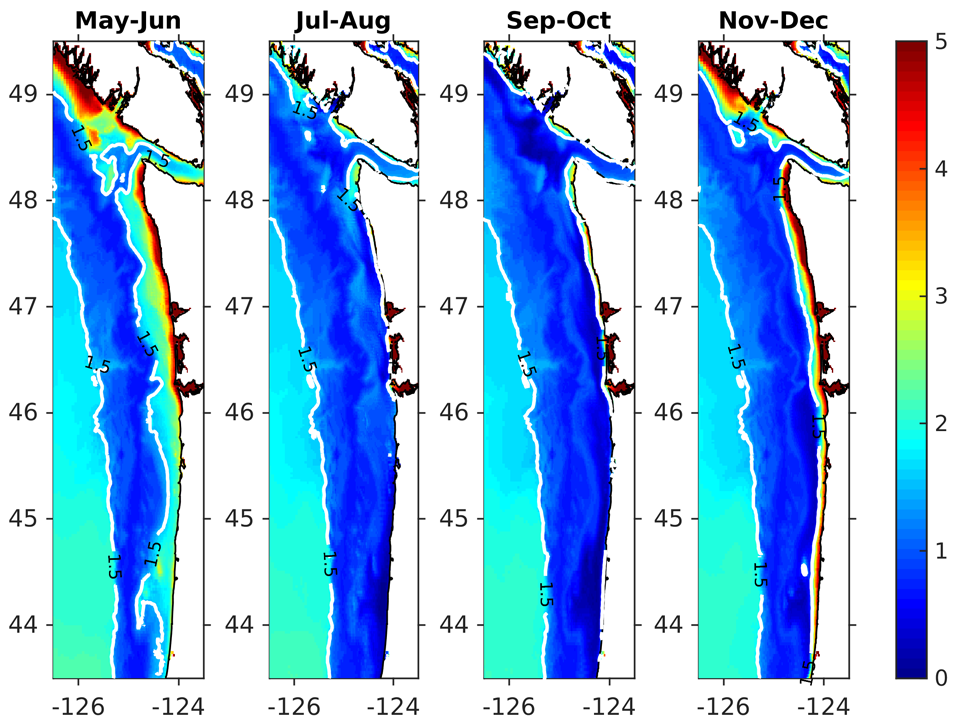 The modeled region bottom oxygen (ml/l) averaged over all three ensemble members and in time for (from left to right) May - June, July - August, September - October, and November - December. Hypoxia (1.4 ml/l) is outlined by the white contour. 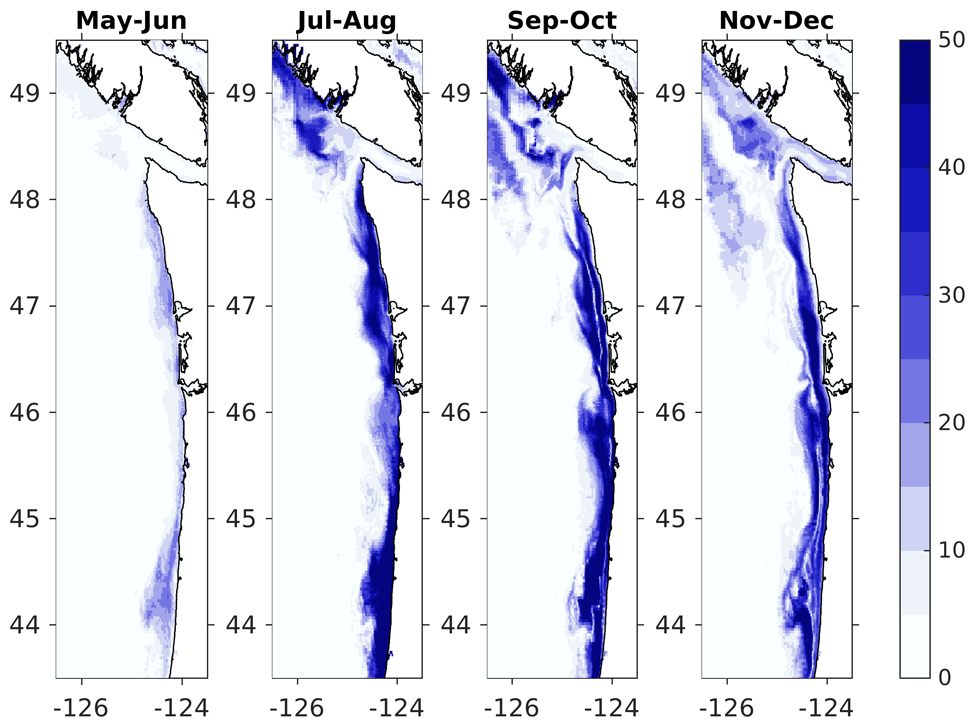 The relative uncertainty in percent for the modeled region bottom oxygen values averaged in time for (from left to right) May - June, July - August, September - October, and November - December. The relative uncertainty is defined as the standard deviation of the ensemble divided by the mean of the ensemble and is reported as a percentage of the mean. 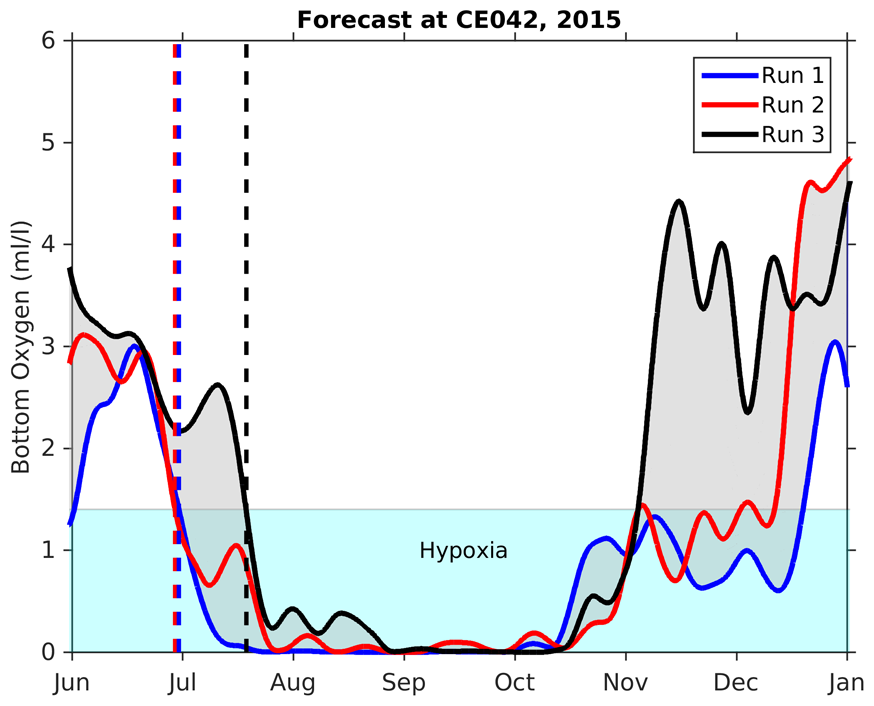 Time series for bottom oxygen at one of the Olympic Coast National Marine Sanctuary Moorings (CEO42,~47.5 N) for each of the three ensemble members. Hypoxia is outlined but the blue region on the plot. The timing of each run’s onset of hypoxic conditions for more than eight days is identified by the vertical dotted lines. 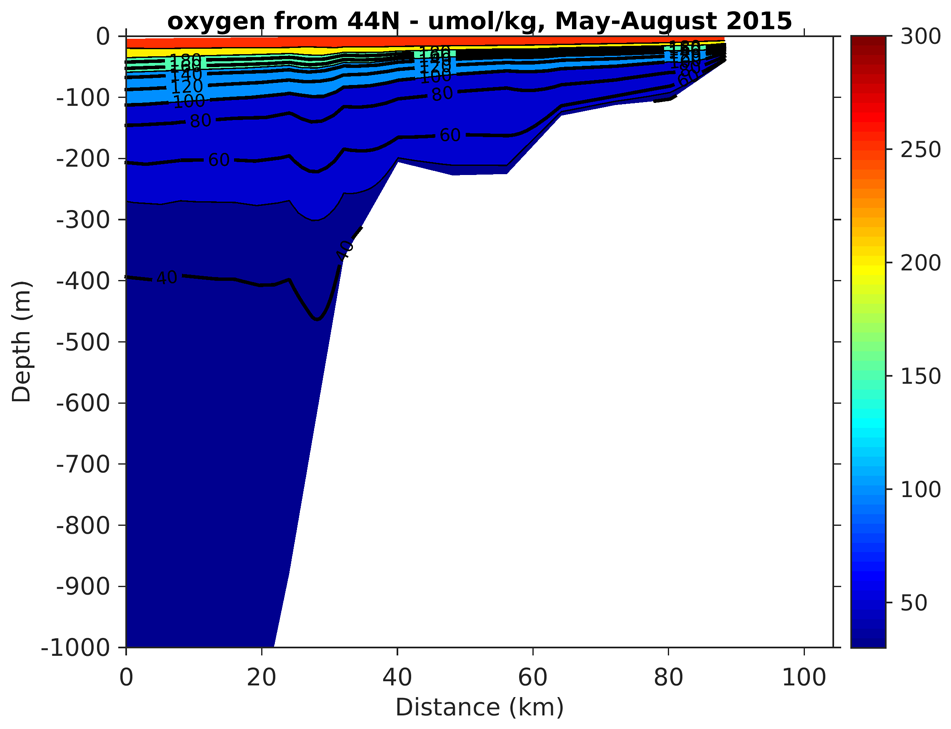 The modeled cross-section from the Newport Line, averaged over all three ensemble members, and averaged over the summer upwelling months. 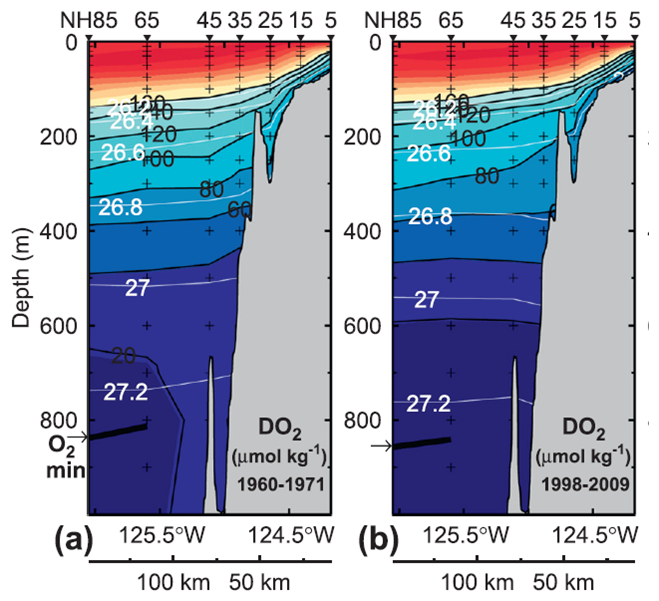 The climatological cross-section from the Newport Line from Pierce et al, 2012, for reference.