J-SCOPE forecasts rely on output from NCEP's Coupled Forecast System (CFS) for the climate forcing, and so it is worthwhile to consider the quality of the CFS predictions from early 2013 in analysis of the J-SCOPE forecasts for 2013. Here we take a regional perspective; folks interested in more quantitative results for the CFS model over an extended period and more on the basin scale, are encouraged to check out the Journal of Climate articles by Wen et al. (2012) and Hu et al. (2012). These studies indicate that the CFS has substantial skill in predicting SST in the Northeast Pacific for lead times of less than about six months, in general. The year of 2013 was no exception. The predictions from the CFS made in early 2013 indicated near-neutral ENSO conditions for the remainder of 2013, with considerable spread between individual model runs, and that is what was observed.

Averaging across the ensemble of CFS predictions, the ENSO forecast from the CFS agreed with observed conditions. Perhaps of greater importance, the CFS predictions from early 2013 indicated the development of warmer than normal sea surface temperature (SST) off the coast of the Pacific Northwest by summer 2013. The CFS correctly predicted the direction of these anomalies, but underpredicted their magnitude. Similarly, the CFS predicted positive surface air temperature anomalies over the Pacific NW for the summer of 2013, but weaker than observed. The winds along the coast of the Pacific Northwest were both predicted and observed to be near normal during the summer of 2013. During fall 2013, however, the actual wind anomalies were upwelling-favorable while the CFS projected near normal winds. The CFS forecasts for SST during this period were reasonably accurate for the NE Pacific in a regional sense. All in all, the predictions from the CFS turned out to be a fairly accurate representation of the actual evolution of the NE Pacific atmosphere-ocean climate system from early in the year to fall 2013. More information can be found here. 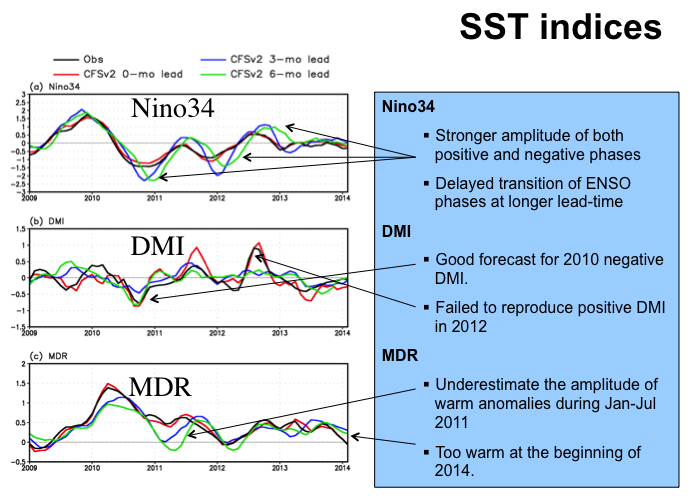